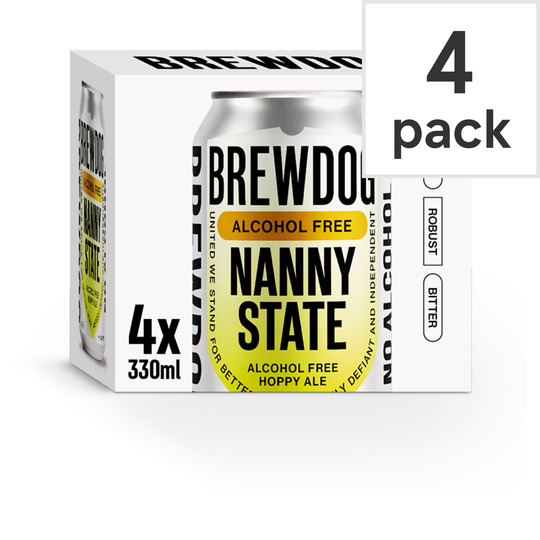 Store cold.For Best Before See Side. Manufacturing date is 12 months prior to the Best Before Date printed on this box.

This is one of the worst beers, if not THE worst beer I have ever tasted. I bought a bunch recently as some people rated it highly. It's a putrid chemical drink which lingers long after it's finished. When my son wakes up in the night I can still taste it. So many better options out there.

Chill it and you'll be drinking it all evening.

I buy a lot of this and I like the fact that it has a really clean taste. The taste might come across as a bit hollow/not at all sweet for a beer of its appearance but you will be glad after you've drunk a fair few to keep up with the other drinkers. You can't complain about Brewdog being citrus-y because that is pretty much how they do things. As I said, these aren't sweet, if you like sickly euro lagers then this isn't for you. Don't expect to drink it like an ale, despite the colour. It really is best chilled.

Brilliant for cutting down on your alcohol units

If you're wanting to cut down your alcohol intake this is the beer for you. Of all the non alcohol beers I've tried this is the very best. It does have a citrus taste like ll of the craft beers tend to have right now but it does add to its charm. this is now my drink of choice through the week and early on at the weekends. Low in calories and no alcohol means its a win win.

It is the worst beer I have ever had the misfortune of attempting to drink, I bought it for my pregnant wife as she also likes beers and ales....she was incredibly unimpressed by this product, I tried it for myself and literally managed 2 sips before tipping it down the sink! It tastes hoppy which I quite like in a beer, then after about 2 seconds, it gets an overbearing bitter taste and also a metallic/chemically taste as though it has cleaning products contaminating it. It is literally the worst beer I’ve ever encountered and an utter waste of money, as it is expensive for what you get.

Been alcohol free for a few moths so tending to review different alcohol free beers as I try them. This one I found really harsh and hard to drink. Very bitter was glad to get rid of them. I'll stick with the Erdinger for now!

Full of flavour, and practicaly no alcohol. Best o

Full of flavour, and practicaly no alcohol. Best of all when you order this at a bar very few people know automatically that you are not drinking. Unlike heinekin 0.0 there is no annoying inquiries

Rank. Very perfumed and then followed by a chemical aftertaste.

I will drink it again, hopefully!

My friend gave me a can of Nanny State at a party because I had the car with me. I love beer, and really enjoyed having this drink without getting tipsy and risking the breathalyser. The taste was proper bitter but also light and flavoursome.

Products you add to your basket will appear here