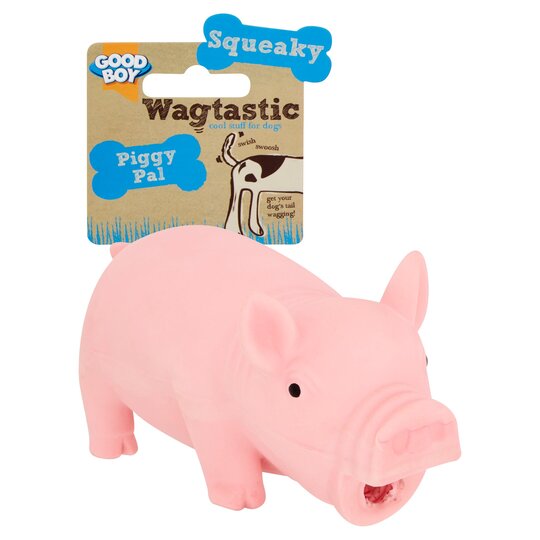 Please note, this toy is NOT indestructible. Replace immediately when worn or damaged. Pets should always be supervised when playing with toys. This is not a child's toy. Keep away from fire. Keep the packaging for future reference. Warning: Contains natural rubber latex.

It's one of the good one's.

My puppy's had two of these. The first lasted a good few months and only fell apart as he wanted to play tug with it, he's still got the 2nd one and the oink still works and he loves it.

My little pup pierced the rubber in under a minute and had the legs, ears, squeaker & stuffing scattered everywhere within 5 minutes. Poorly constructed for a dog toy and the rubber is too thin for a dog's teeth. Total waste of money.

For once there is a soft rubbery squeaky toy that my terrier loves without disintegrating it. He usually disembowels squeaky toys within about 5 minutes but the only thing he's done with this one is chew its ear off. It's his favourite indoors toy, feels very soft to touch and the squeaker inside seems quite robust. Obviously, as with any toy, I would never leave him alone playing with it just incase he gets carried away and pulls out the squeaker. I keep mentioning squeaker but in actual fact it has more of a growly honk than a squeak which is probably more appropriate for a pig. We nicknamed it Mr. Pigly and he's very protective of it, lol. I've given it a 5 star rating for durability, cuteness and for the pleasure it gives my dog.

was new for minutes.but fun

made of very thin rubber, lasted ten mins top. Teddy riped the face-off and within minutes the stuffing and squeaker ripped out. Although he still enjoys playing with it.

Puppy loved it. The oink sounds were hilarious...

Puppy loved it. The oink sounds were hilarious... but less so when he decide to play with it at 4am! He had it for 2 months with no issues. However, once his adult teeth came in, he was able to bite right through it and it unfortunately had to be binned.

Pig noise broke after only 30 minutes

Pig noise broke after only 30 minutes - waste of money!

Squeaker stopped working after a day which was dis

Squeaker stopped working after a day which was disappointing as the toy was not broken or torn just poorly put together.

Our border collie loves it! Was a bit scared of noise for about 5 minutes and now it’s his favourite thing. The honk disconnected after a day rough play but easy to put back in place. Agree with other reviewer that it’s the best and worst toy ever. Absolutely hysterical!

No problem with the toy except both our dogs were afraid of it!

my terrier destroys every toy within minutes, not this pig, he could easily destroy it as its soft, but he carries it with him and loves the noise. its not a squeaky toy, but a honk. would have to recommend he loves it.