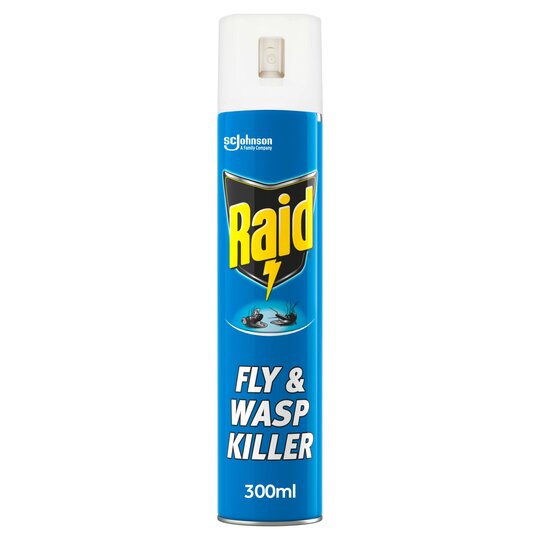 Danger Contains 1R-trans phenothrin 0.125% (0.125g/100g), prallethrin 0.10% (0.10g/100g). Extremely flammable aerosol. Pressurised container: May burst if heated. Toxic to aquatic life with long lasting effects. If medical advice is needed, have product container or label at hand. Keep out of reach of children. IF IN EYES: Rinse cautiously with water for several minutes. Remove contact lenses, if present and easy to do. Continue rinsing. Protect from sunlight. Do not expose to temperatures exceeding 50°C. Keep away from heat, hot surfaces, sparks, open flames and other ignition sources. No smoking. Do not spray on an open flame or other ignition source. Do not pierce or burn, even after use. Do not breathe spray. WASH HANDS AND EXPOSED SKIN before meals and after use. Caution: Use only as directed. Do not spray onto people or pets. Remove or cover food, food preparation equipment and eating utensils. REMOVE OR COVER ALL FISH TANKS AND BOWLS, terrariums, aquariums and animal cages before application. Turn off aquarium air-filter during use. Do not spray onto wall paper and keep spray at least 1 metre away from all surfaces and walls. KEEP IN A SAFE PLACE. Keep away from food, drink and animal feeding stuffs. Use only in well-ventilated areas. This material and its container must be disposed of in a safe way. HAZARDOUS TO BEES. ACTION SHOULD BE TAKEN TO PREVENT FORAGING BEES GAINING ACCESS TO TREATED NESTS, PREFERABLY BY REMOVING THE COMBS OR BLOCKING THE NEST ENTRANCE. Contains fragrance. May produce an allergic reaction. SOLVENT ABUSE CAN KILL INSTANTLY.

Hopeless just doesn't kill flies. In a studio flat with good insulation and double glazed windows tried the suggested measure of spraying the whole place and leaving for more than 15 minutes. Came back, there was a fly buzzing me, sprayed it directly and still no effect. Perhaps hitting it with the can is the only option that could have an effect. Or maybe flies have become immune to this fly spray or the formula has been changed, as I remember in the distant past it did work. Back to a rolled up newspaper for me.

Wholly ineffective at killing any kind of fly.

Don't know what they have done to this fly and wasp killer, but it doesn't work anymore. It used to be good and now it is rubbish. I sprayed the same fly six times with this and it had no effect whatsoever. Don't waste your money.

Plain and simple, it is useless!

Discovered a Queen Wasp in the middle of building a nest in my loft (had done about 2CM down from the top) and was actively building the middle structure. Nipped to Tesco round the corner, and bought a can of this.. the wasp was in the middle of the nest when I hit it with a good 4 second blast. Definitly works in seconds with a nice direct hit. It lasted maybe 30 seconds writing around on the floor where it fell before I hoovered it up, but it was not getting back up that's for sure. No idea if waftingh it round the room works, but with a direct targeted blast.. it 100% does.

This spray does work ignore the negative reviews, I sprayed a large blue bottle this morning, a short blast, after a few seconds the said fly went into its death spasms, after a further few minutes, it was dead, littlr legs sticking towards fly heaven

Absolute rubbish, in fact flies and bluebottles come back for repeat spraying as if they enjoy the experience! Just finished a year old can that knocked flies down in seconds but this is useless!

Not a patch on the old formula. This water based s

Not a patch on the old formula. This water based stuff doesn't work at all if you try to use it like the old version. A direct hit on a fly has no effect at all if you haven't started by closing all the doors and windows and then spray for "between 8 and 10 seconds" arcing the spray into the centre of the room. You then have to leave the room sealed for at least 15 minutes, and then air the room for 2 hours before spending any length of time in there. I much prefer the old version that allowed me to spray an annoying wasp out of the air and have it incapacitated in less time than you are now supposed to stand emptying the spray can into the centre of the room.

Simply the best...don't bother with others

Don't waste your money on other fly sprays; this is THE BEST. I don't understand the bad reviews as I've found no difference in its knock-down ability with flies. As long as you get a 'direct hit' on a fly (only one spray needed), you know it's doomed as it goes whizzing around the room like a mad thing before landing on its back and spinning around and then it's dead. What's not to like??? (PS: I have tried cheaper alternatives and they were useless.)

Products you add to your basket will appear here